A good tax system raises the revenue needed to finance government activities without imposing unnecessary costs on the economy. Tax reform is about how revenue is raised, not just about how much. 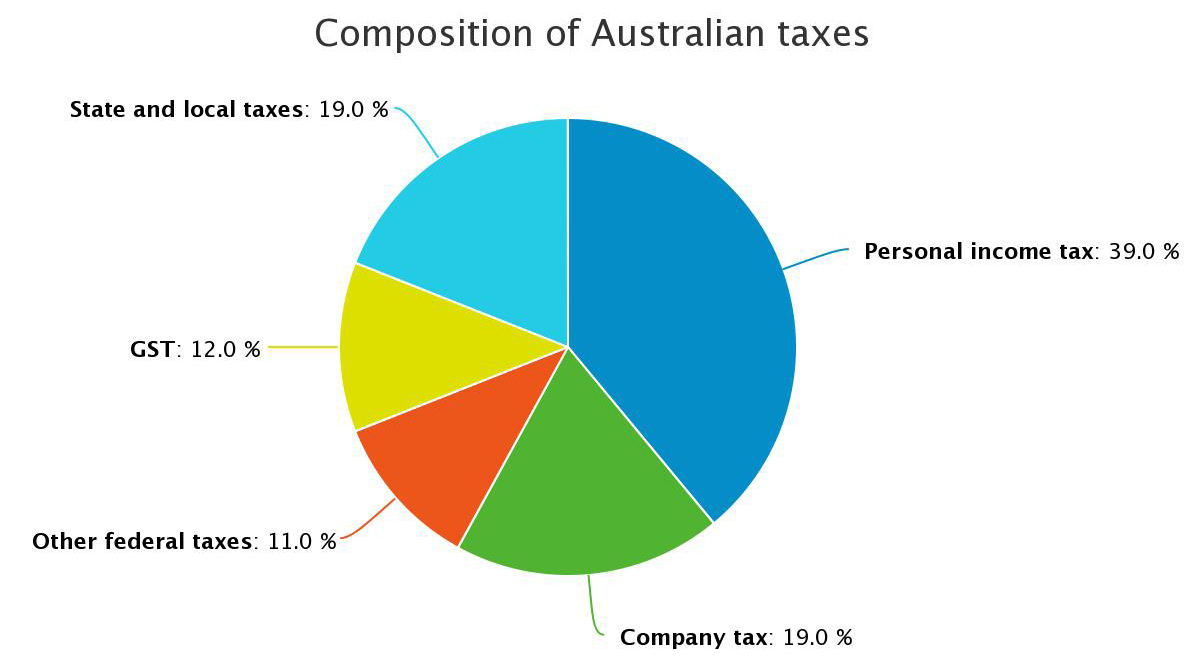 Australia relies heavily on individuals’ and corporate income taxes compared with other developed countries, as well as some regional competitors. Australia’s reliance on individuals and corporate income taxes remains much the same as it was in the 1950s, despite the significant change to the economy. This reliance is projected to increase further, largely due to wages growth and individuals paying higher average rates of tax (bracket creep). 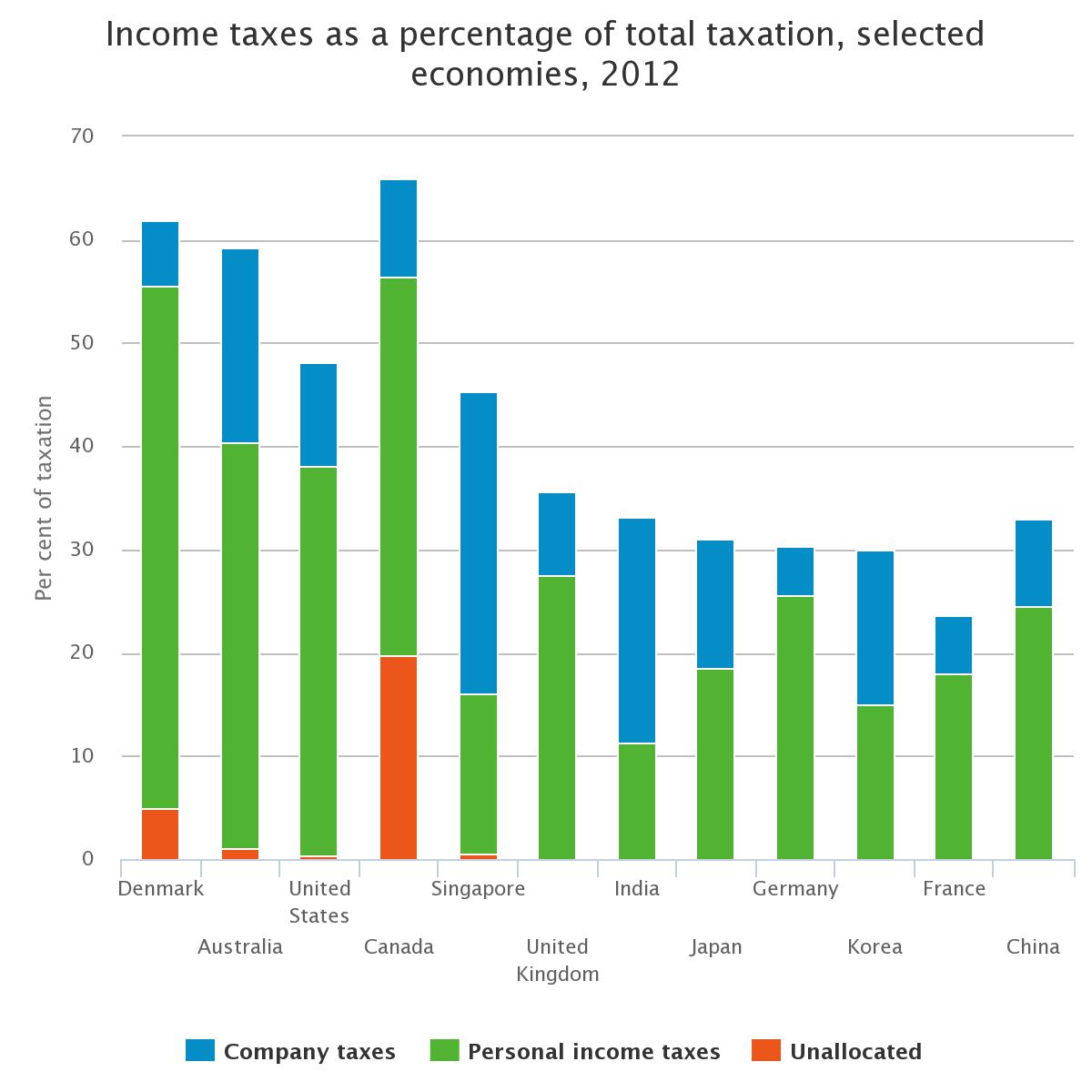 Economic modelling shows that company tax and stamp duties in particular affect economic growth. The entire economy benefits from reducing the economic costs of taxation, including workers through higher wages.

Much of the burden of Australia’s high company tax rate is expected to fall on Australian workers. This is because, over time, the amount of capital investment in Australia (for example, the construction of buildings and purchase of equipment for production) is affected by the company tax rate. Lower amounts of capital investment in the Australian economy will reduce the output or productivity of workers and, in turn, reduce the real wages of employees.

Australia’s tax and transfer systems are highly progressive, which supports fairness. High effective tax rates, including as a result of targeting in the transfer system, can reduce participation incentives for some groups. Bracket creep exacerbates this problem.

Tax settings for savings should give people the incentive to save for their future, but differences in the taxation of alternative savings vehicles affects savings choices.

Individuals’ income tax is the single most important source of government revenue. Since the mid 1970s it has consistently raised around half of the Australian Government’s tax receipts and continues to be a stable and predictable source of revenue.

Australia’s individuals income tax schedule is progressive , with a high tax-free threshold followed by increasing tax rates at subsequent thresholds. This means that the largest amounts of income tax are paid by high income individuals. In 2011-12, around 2 per cent of individuals had taxable income above the $180,000 threshold and collectively paid around 26 per cent of total individuals’ income tax.

For many people, individuals’ income tax does not significantly alter their workforce participation. However, it can be more distorting for particular groups of taxpayers, such as low income earners or the second income earner in a family, or high income earners with the ability to plan their tax affairs.

The progressivity of the tax and transfer systems 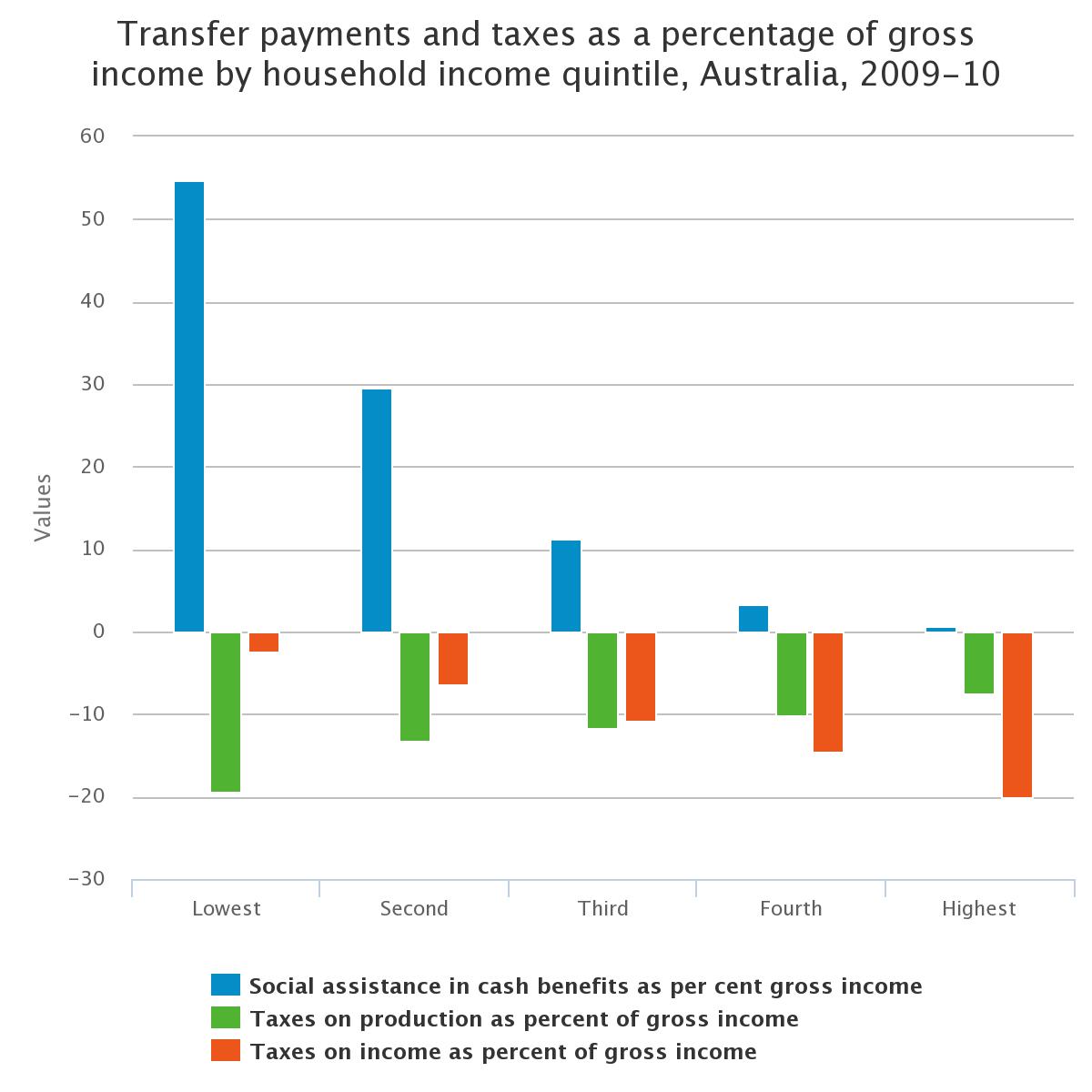 Australia does not apply a separate social security contribution. Pension costs are funded from Australia’s main revenue stream and supplemented by the private superannuation system.

A trade-off for Australia’s low average individuals’ tax burden is that the statutory and effective tax rates, produced by the interaction between the tax system and tightly targeted transfer system, are comparatively high by international standards.

Progressivity in the individuals’ income tax system is delivered by applying higher rates of tax above different income thresholds. These thresholds do not automatically keep pace with inflation or wages growth.

Bracket creep (also called ‘fiscal drag’) is where a higher tax rate applies to a taxpayer, as their income increases over time, but tax thresholds are held steady. Bracket creep reduces the progressivity of the individuals income tax scales over time. This is because the tax increase for individuals with lower incomes is greater as a proportion of their income than for those at higher incomes. 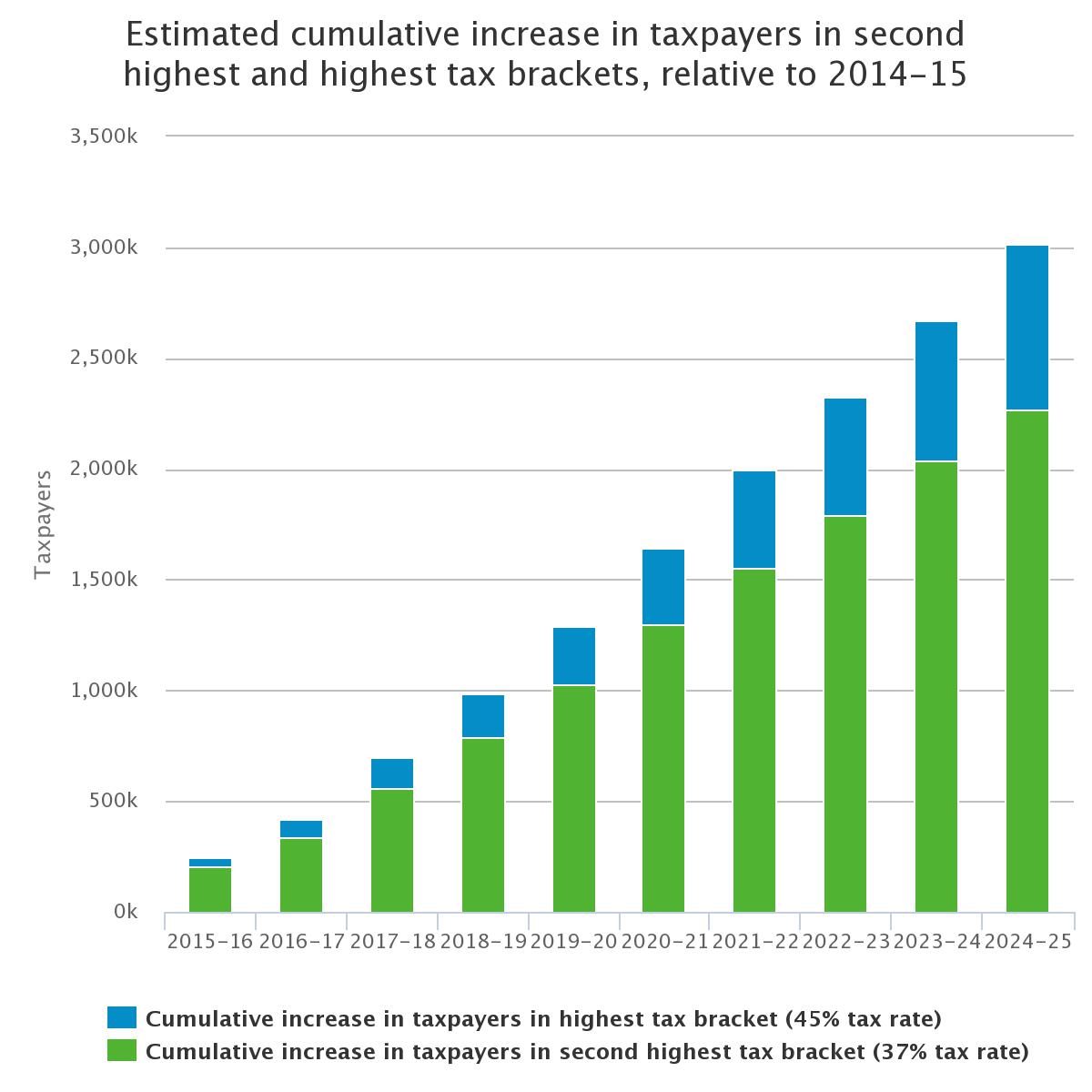 Australia’s current tax system taxes savings differently depending on the form of the saving. As a result more savings are held in superannuation and housing than would otherwise be the case.

The effect of the tax system on the aggregate level of domestic savings is uncertain. The effect of tax on domestic savings is unlikely to significantly affect the aggregate level of investment in Australia (which is determined largely by the decisions of foreign investors). This suggests that taxing income from savings (at least to a point) is a relatively efficient way of raising revenue. However, some level of concessional tax treatment for savings may be warranted to reduce any disincentives to save.

Taxing savings income also has distributional effects, in part because higher income individuals have a greater capability to save in lower taxed savings vehicles. However, distributional judgments must take into account the full amount of any income support received, such as the Age Pension.

Tax is increasingly important as competition for foreign investment intensifies and businesses become more mobile. Australia’s corporate tax rate is high compared with many of Australia’s competitors, especially in the Asia-Pacific region.

While company tax is paid by companies, the burden is passed on to shareholders, consumers and employees. A more competitive business tax environment would encourage higher levels of investment in Australia and benefit all Australians through increased employment and wages in the long run.

Dividend imputation ensures there is no double taxation on income from Australian shares owned by Australian resident shareholders and supports the integrity of the business tax system. However, it makes little contribution to attracting foreign investment to Australia other than eliminating dividend withholding tax for franked dividends paid to foreign shareholders. It also involves a significant cost to revenue and may impose more compliance costs to achieve similar outcomes to other jurisdictions.

Australian small businesses are numerous, diverse, and make an important contribution to the Australian economy. These businesses adopt different legal and management structures, and may be driven by different preferences and profit motives than larger businesses.

Navigating a complex tax system is disproportionately burdensome for small businesses, especially as certain features of the system can encourage them to adopt particular legal structures that are costly to establish and maintain.

The not for profit (NFP) sector is large and diverse and provides important benefits for the Australian community.

Tax concessions for the sector can also increase complexity, in part because they vary according to the type and purpose of NFP organisations. In some cases, NFP tax concessions provide NFPs with a competitive advantage over their commercial competitors.

The GST and state taxes

As with most federations around the world, State and Territory governments in Australia (including local governments) spend more than they raise in revenue. The difference is made up by grants from the Australian Government.

The States and Territories receive all revenue raised by the GST. About 23 per cent of total state revenue comes from the GST, with state‑levied taxes generating about 31 per cent of total state revenue. The GST is relatively efficient compared to some other taxes because it has a much broader base than many other taxes. However, exemptions reduce its efficiency and introduce significant complexity. In total, around 47 per cent of Australia’s national consumption is subject to GST.

Indirect taxes on specific goods and services can be an efficient way to raise revenue. However, an ad hoc approach has contributed to a range of complexities and inconsistencies.

Fuel taxes are the largest source of revenue from a specific good or service.

Taxation of alcohol has two separate regimes, a value based tax for wine products and a volume based excise tax for other alcoholic beverages, with 16 different excise categories.

The Luxury Car Tax has a narrow tax base, is complex and is the Australian Government’s only luxury tax on a specific good or service.

The complexity largely reflects the historical foundations of the tax system and the way changes to the system have been implemented in the past. This makes it difficult to address without broad community support.

Tax administration is increasingly important to minimise the impact of tax system complexity and to make it easier for taxpayers to comply with their obligations.

Establishing a metric to measure tax complexity could assist in managing the complexity of the tax system.

Governance institutions and arrangements apply across the tax system, including at the policy design, legislative, administrative, and appeals stages.

In Australia, decisions on tax policy are made by the Government and the Parliament, with formal policy advice provided by the Treasury, in consultation with the ATO. Further advice is provided by many different groups, including tax practitioners, industry groups, think tanks, the public and the media.

A range of possible reforms to tax system governance could be considered to increase certainty, improve consultation processes and enhance public understanding of tax policy and administration.