Thank you for the opportunity to participate in this timely panel discussion.

Before I begin, I would like to acknowledge the traditional custodians of country throughout Australia, and their continuing connection to the land, water and community.

I would like to pay my respects to their Elders past, present and emerging, and extend that respect to other Aboriginal and Torres Strait Islander people present.

As you would expect, the recent weakness in wage growth has been an important policy question for Treasury.

It's a focus not only because of the broad implications of low wage growth for the welfare of Australians and the operation of the economy, but also because taxes on labour income are one of the Government's core revenue streams.

As such, Treasury has done a large amount of analysis to better understand low wage growth. Today, I will discuss some of this analysis, which has increasingly made use of microdata.

I would also like to cover some of the implications of this analysis for future wage growth, productivity and structural reform.

At the outset, it's important to say that much of the observed weakness in nominal wage growth isn't really a puzzle.

These include lower inflation and inflation expectations, slower productivity growth, high rates of participation and spare capacity in the labour market, and the unwinding of the once in a century commodity price boom.

Yet, these factors don't seem to be able to explain all of the weakness.

Wage growth has consistently been a bit weaker than would have been expected based on historical relationships with its main determinants. As discussed by Natasha, this has caused traditional Phillips curve models to over-estimate wage growth by around ½ of a percentage point.

Microdata insights into other potential factors

The weakness that remains unexplained from such Phillips curve models could reflect either cyclical or transitory factors, or it could potentially reflect structural factors.

In trying to differentiate, Treasury has increasingly turned to microdata sources, which has involved an investment in capability building, and in building the data sources themselves.

These data allow us to get a richer insight into how the economy operates, as they allow us to exploit the heterogeneous nature of firms and workers in trying to tease out economic mechanisms.

This is particularly useful when considering wage growth, as it allows us to abstract from broad cyclical factors that affect everyone's wages, such as mismeasurement of labour market spare capacity, and to instead isolate any structural changes.

Slowdown in wage growth is broad based

The first important insight we can take from microdata is that the slowdown in nominal wage growth is relatively broad based, and has been experienced across income, education, age and occupation categories (Treasury 2017).

It is also not isolated to the Australian economy.

On top of that, recent Treasury research shows that the slowdown is apparent even when following trends in wage growth for individual firms (Andrews et al 2019). 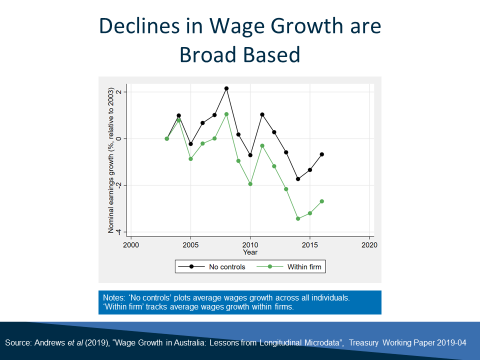 This is evident in the green line in this chart, which shows that average nominal wage growth within firms was around 2 percentage points lower in 2015-16, relative to 2010-11.

We also see a similar decline when we track nominal wage growth for individual workers, or fixed firm-worker relationships — that is, just looking at variation in the wages of a worker that remains at one firm.

These results suggest that the slowdown in nominal wage growth is not only driven by compositional changes, such as changes in the nature of workers' skills or ages, or of firms' industries.

The second important insight from microdata is that there is a strong positive link between real worker wage growth and idiosyncratic firm-level productivity growth. And, this relationship has declined modestly in recent years.

These findings are laid out in the same piece of recently released Treasury research (Andrews et al 2019).

The authors examine the relationship between worker real wages and firm productivity using a de-identified matched employer-employee database that has been developed in conjunction with other government agencies. This allows them to account for inherent differences across firms and workers, and also for the fact that highly productive workers are likely to be attracted to more productive firms.

Based on rough, back-of-the-envelope calculations, the weakening in the relationship between firm-level productivity and worker wages could potentially account for a noticeable portion of the unexplained weakness in nominal wage growth. 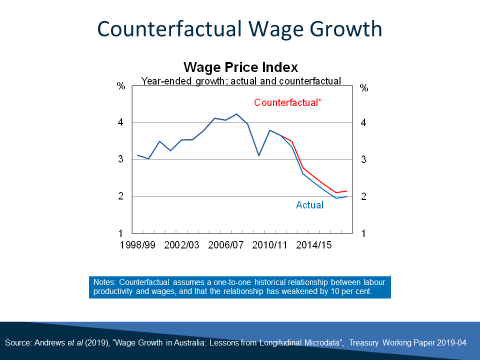 This weakening in the relationship between firm productivity and real worker wages suggests that some structural factors have been weighing on wages.

Yet, further insights from the microdata can help shed light on potential structural factors.

For example, recent analysis has highlighted the roles of market dynamism and labour market fluidity in the determination of wages.

Forthcoming Treasury work highlights the fact more frequent job switching is associated with higher real wage growth, even for those that stay in their job (Deutscher 2019).

This is evident in this graph, which plots real wage growth for workers that stay in their job in a local area, versus the frequency of job-switching in that area, after accounting for demographic and cyclical factors. 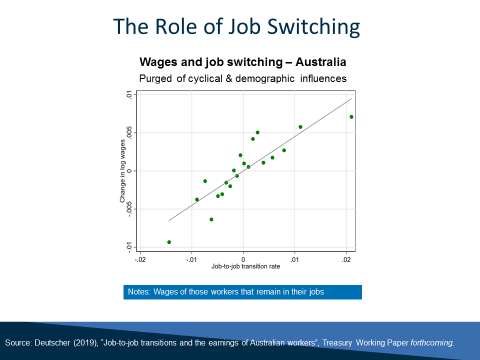 In this context, the trend decline in the national job-switching rate from 11 per cent in the early 2000s to 8 per cent — which captures cyclical and structural factors — warrants further attention.

Moreover, much of the decline in job switching appears to reflect a reduction in worker transitions from mature firms to young firms.

In turn, this appears to be associated with decreasing rates of firm entry, with the rate of entry for employing firms having declined to 11 per cent in recent years, from 14 per cent in the early 2000s.

To continue the story, it also appears to be the case that workers are now less likely to move to more productive firms (Andrews and Hansell 2019).

In particular, once we account for cyclical factors, the rate at which labour is reallocated from low-productivity to high‑productivity firms has declined by around 2 percentage points since the early 2000s.

As high-productivity firms absorbed relatively less labour, this is likely to have weighed on aggregate productivity and real wage growth as on average highly productive firms pay higher wages.

This is true even as spare capacity in the labour market is reduced and the drag from the end of the commodity boom recedes.

Yet, the microdata results to date support a pro-productivity agenda, including structural policy changes that encourage workers to move between jobs, that encourage investment and innovation and that support the broad adoption of innovation across workers, firms and industries.

One such reform is the proposed Consumer Data Right. This will enable the development of better and more convenient products and services for businesses, and therefore support more efficient and competitive business processes.

Reforms to cities, including to planning and zoning restrictions, and to stamp duties, are likely to lead to a more efficient use of land, and will lower barriers that discourage people from moving to areas with greater job prospects.

Reforms to the financial sector are likely to be important. More closely aligning incentives between financial service firms and customers should support productivity growth in the sector as well as restore trust in the financial system.

Policies that improve human capital will be essential to future wage growth, as knowledge-based work and artificial intelligence technologies become more important contributors to our economy.

But there are signs that our skill development systems are not working as well as they could be.

School education outcomes have slipped over time and against other developed countries, and this is having negative impacts on students' readiness for further education.

This is particularly concerning given human capital can help to build resilience to technological and a wide range of economic challenges.

Reducing unnecessary regulation or modernising outdated regulatory structures would also boost productivity. For example, are our occupational licensing regimes robust to shifts in technology and consumer expectations? Or could they be unduly limiting innovation and job opportunities (Productivity Commission 2017)?

The changes to regulatory settings I have noted and the inevitable process of new technologies entering workplaces are likely to be disruptive and involve implementation challenges.

As policy advisers, we recognise these challenges, as do policy makers. That is why structural reform assistance programs have previously been put in place to help manage and minimise the transition costs faced by affected workers, businesses and communities.

Previous experience tells us that to successfully implement structural reforms we need to build an evidence base that provides a wide understanding of who is affected, and we need to tell a compelling story about the benefits. And then we need time to build community acceptance for reforms.

On that note, I would, again, like to thank you for the invitation today. I am pleased to outline Treasury's approach to better understand low wage growth and I welcome today's discussion.