Which Commonwealth Government entities are required to comply with this policy?

All non-corporate Commonwealth entities must comply with this policy.

The Department of Finance flip chart can be used to assist in determining whether a Commonwealth entity is non-corporate, corporate or a company.

Does this new STR requirement apply to existing Commonwealth contracts that are operating after 1 July 2019?

No. This policy does not require Commonwealth entities to amend existing contracts or deeds of standing offer that are in place prior to this policy's commencement date.

What happens if a satisfactory STR is not received before the tender closes?

The ATO will issue an STR request receipt following an application for an STR. In circumstances where a satisfactory STR has not been issued in time to meet the tender deadline, the STR request receipt can be provided with the tender, demonstrating a STR has been requested from the ATO. In this case, the satisfactory STR must be provided within four business days of tender closing and before a contract is awarded.

It is recommended that entities include clear instructions for tenderers regarding the process for lodging the STR after the tender closes – noting that once the tender closes the STR cannot be lodged via AusTender. If a STR is not lodged within four business days of tender closing, the tender response cannot be considered.

What should a Commonwealth Procurement Officer do if the tenderer says they have issues when seeking an STR?

Applicants should be directed to contact the ATO on:

Do Commonwealth Procurement officer need to undertake an analysis of whether an applicant has a satisfactory STR?

No. The STR provided by the applicant will clearly indicate if the applicant met the criteria of having a satisfactory engagement with the Australian tax system.

STR expires before awarding the contract

Once the procuring Commonwealth entity receives the satisfactory STR from an applicant – as per the policy, the minimum requirements under this policy are satisfied.

However, the Commonwealth entity may optionally choose to outline in the "request documentation" that if the STR expires after the close of the tender yet before the awarding of the contract, that a renewed STR is required. The contract will not be awarded if the business fails to comply with the conditions included in the "request documentation".

STR expires during the contract

If a Commonwealth entity has chosen to state in their "request documentation" and contract terms that a STR must be maintained throughout the life of the contract, a renewed satisfactory STR is required to be submitted as outlined in these documents. The consequences of contravening this requirement will also need to be clearly outlined in the "request documentation" and contract terms.

If the procuring Commonwealth entity did not outline specifics about renewing STRs, receiving a satisfactory STR at time of tender satisfies the requirements of this policy.

How can a Commonwealth entity ensure updated STRs are maintained throughout the life of a contract?

A Commonwealth entity can decide to exercise its discretion to require successful applicants and first tier subcontractors to maintain a valid and satisfactory STR during the life of a contract. This requirement must be included in the "request documentation" and the resultant contract between the parties.

If this contract requirement is not met, it is up to the Commonwealth entity to take action as outlined in the contract terms, such as rectification of the breach or termination.

What are the consequences for applicants if they do not provide a valid and satisfactory STR?

The provision of a satisfactory STR is required to be included in "request documentation" as a condition for participation. If an applicant does not provide a valid and satisfactory STR at close of tender, the tender will be set aside and not considered.

If a tenderer/applicant has provided a STR request receipt but a satisfactory and valid STR is subsequently not provided to the procuring entity within four business days of tender closing and, or before a contract is awarded, the applicant's tender will not be considered further.

What if the original estimate of the procurement value was under $4 million including GST (therefore no STR is required) but the resulting contract value ends up being more than that?

At the time of approach to market the estimated procurement value determines whether the policy applies, this is in accordance with paragraph 9.2-9.6 of the Commonwealth Procurement Rules. Commonwealth entities should document how the estimated value was determined. In the above scenario, no STRs are required to be submitted by applicants even if the resulting contract value is above the $4 million (including GST) threshold. This is consistent with the approach taken when considering the broader economic benefits in procurement.

What if the original estimate of work to be undertaken by a subcontractor is estimated to be less than $4 million but there is an option to extend which may take the value of the work over $4 million?

In this case in determining if a STR is required in respect of the subcontractor, you should take into account the value of the work for the initial contract and any options to extend.

Do Commonwealth Procurement officer need to hold the satisfactory STRs of first tier subcontractors engaged in sub contracts above $4 million (including GST)?

No. However, the Commonwealth entity must require, in the "request documentation" and/or the contract (if applicable), that the prime contractor hold copies of satisfactory STRs for any first tier subcontractors that the applicant will engage to deliver goods or services with an estimated individual value of over $4 million inclusive of GST.

What is a first tier subcontractor under this Procurement Connected Policy? 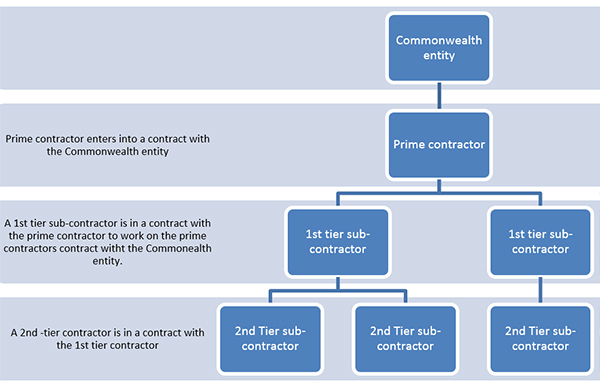 Why is it necessary to have STRs submitted at the point of establishing a panel when the panel member may not end up having any work orders over $4 million inclusive of GST?

This was considered to be the most efficient and practical approach and is consistent with the approach taken when considering the broader economic benefits in procurement.

Is it necessary for applicants to submit STRs when a panel originally established prior to 1 July 2019 is refreshed?

No. This policy will apply to the process to establish a panel arrangement from 1 July 2019, or to refresh a panel established after that date, when a total value of orders under the arrangement is collectively estimated to be over $4 million (including GST).

For existing panels, including panels established before 1 July 2019, but that are refreshed or renewed from 1 July 2019, there is no requirement to obtain a satisfactory STR unless requested by the Commonwealth entity.

Can a Commonwealth Procurement Officer contact the ATO to confirm an applicant's details or their tax history?

No. Secrecy provisions in tax laws do not allow the ATO to divulge any taxpayer information to a third party, including to its own procurement staff.